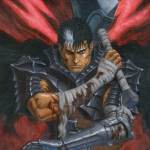 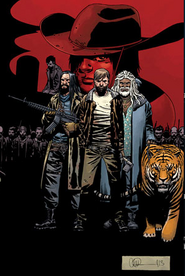 "You see, in this world there's two kinds of people, my friend: Those with loaded guns and those who dig. You dig."
—Blondie

Hello there. I am a huge fan of The Walking Dead and an admin on this wiki. Any questions about it can be directed to my talk page and I will be willing to answer any questions people have about the franchise, wiki technical stuff or even off-topic nonsense. So please, look around my page and have fun! 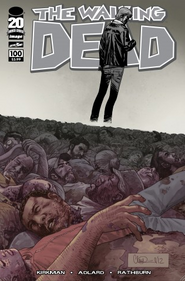 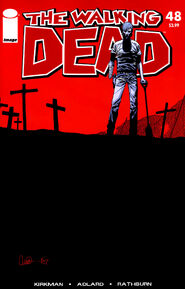 Well like anyone who is part of the wiki, I am a huge The Walking Dead fan. I got into the comic series in November, 2008 with Issue 54 and learnt that a show is going to be made for it in 2010. Like many I was excited and was glad the show delivered. Then the Video Game series happened in 2012 and has become one of my favorite games of all time.

Now not everything can be positive so let me tell you something; The TV show has recently devolved into something I am not to fond of. Now don't think this means I hate the show, it is still one of my favorite series on Television. I do however think that the show has made some bad decisions in Seasons 2 and 3, namely killing Dale and Andrea.

If you are familiar with the comic then you will know Dale and Andrea are two of the most important and longest living characters. However the show killed Dale off way to early and it butchered Andrea's story arc so much they were forced to kill her off! I do however have high hopes for Season 4.

Currently, at this point in time, I have decided to no longer watch The Walking Dead TV series. I cannot stand the changes it has made to the awesome source material it has had to work from and I don't want to give AMC the extra buck by watching something I don't like. So, I am not the best guy to ask about stuff on the TV series. It is best to take questions about it to the TV staff not myself.

"My dick is so hard right now I could crack steel. I should wrap it in barbed wire and call it Lucille Two."
—The immortal words of Negan.

"I'm still. NOT. BITTEN. I never was. And you left me out here to die."
—Clementine.

Characters I Can Tolerate (In Order)

KILL IT WITH FIRE

And The Award for Worst Actor...

The Rest of Em'

The Good, The Bad and The Ugly

Once Upon a Time in the West

No Country for Old Men

For A Few Dollars More
Retrieved from "https://walkingdead.fandom.com/wiki/User:Gravelord?oldid=1152201"
Community content is available under CC-BY-SA unless otherwise noted.