Hey everyone! So as most of you know, there is a wraparound cover for Issue 106 featuring Rick, Andrea, Michonne, and Jesus fighting off a horde of walkers. 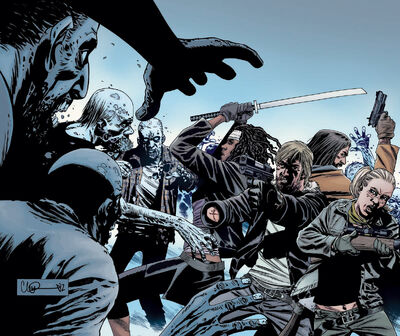 However, some of you may not know that this issue also has two variant covers. One of which features Charlie Adlard, the illustrator of the series. The cover commemorates his 100th issue working for the series. The cover is similar to the cover of Issue 1, but rather than featuring Rick, it features Charlie himself with some personal items of his including his drum kit, Star Wars lego, and car.[1] The cover will be limited to two thousand copies. 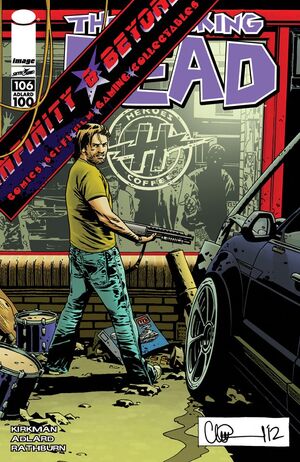 Comic Series Spoilers Below
Stop reading if you are not up to date with the comic series, currently at Issue 105.

The second variant cover features Rick, seemingly being haunted by previous panels of The Walking Dead, arranged in a shape resembling a zombie. A zombie biting off Rick's head. If you look closely, the panels hold some pretty important moments in Rick's life, including his hand being cut off by The Governor, the death of Lori and Judith, and Negan's introduction. Not to mention the deaths of some of his closest allies and friends, including Tyreese and Glenn. 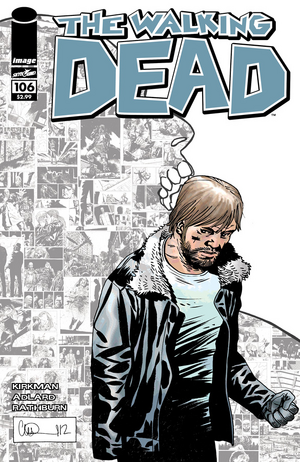 Let me know what you think of these covers in the comments section below!

Fight 12: Jesus and Merle vs. Dwight and Daryl

Don't forget to vote in the latest fight here! Jesus and Merle are currently winning.

Have a great new year! May it be filled with all kinds of Walking Dead goodness.

Retrieved from "https://walkingdead.fandom.com/wiki/User_blog:Axel_TWD/Variant_Covers_for_Issue_106?oldid=294422"
Community content is available under CC-BY-SA unless otherwise noted.