Well, it’s that time again. Time to take another horrifying dive into the mind of Robert “Rick Grimes” Kirkman. It’s finally here, the BIG MASSIVE EPIC STORY ARC!!!! New World Order. And oh, boy its a doozy, we’re getting into fanfiction.net material, here, folks (minus the smut). So buckle up. P.S: didn’t both reviewing the last issue since Tommy did and there wasn’t much content anyway, but it was shit as usual.

Issue 175: Commonwealth man is kind of mean and WHERE IS STEPHANIE and video game crossover, that’s pretty much it 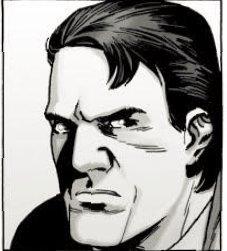 Our issue begins as most epics do, where the one before the last one left off. Since the comic rarely backtracks and follows a straight path with each issue taking place after the last I like to think during the events of 174 Eugene’s group and the Commonwealth people were just frozen in time waiting for the story to continue. Anywho, the badass stormtrooper guys shoot some zombies and Princess makes a FUNNY joke about their ding-dongs, oh man my sides! Seriously what is her purpose? The character that’s introduced in this issue is already more important than her and we’re about to meet like ten new characters, she’s going to get buried pretty quickly, not that I’m complaining, just kind of confused as to why she was even introduced.

After that, we’re introduced to a new character: Lance Horny, it’s admittedly kind of nice to see a character that’s not just “Generic and nice man #458339494” he’s still not very interesting, he just kinda comes off as a dick, will probably be a villain later. He does several of TWD’s trademark “villain faces” in this issue, I’m expecting to see the classic “ANGRY EVIL EYES” in the coming issues. The fact that he basically looks like cross mutation of Negan and Chris doesn't help either. He starts asking the group questions and then out of nowhere Eugene flips shit and starts going “WHERES MY TOTALLY NOT GOING TO BE GIRLFRIEND STEPHANIE WHAAA” Seriously he repeats this question like five times in the issue, the Lance guy literally sighs at it at one point. This is so fucking out of character for Eugene. Pre-timeskip Eugene would never be stupid enough to antagonize a group of armed men pointing rifles right at his fucking head. He’d either keep quiet or play it smart, try to talk them down using logic and reason, not scream at them like a brute. His actions in this issue are much more in line with someone like Abraham or Michonne, but not Eugene. God, just kill this fat fuck already. 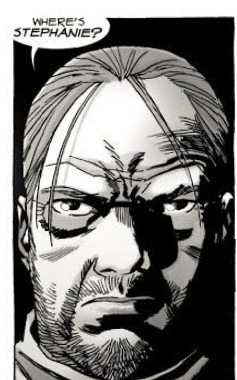 Anyway without really learning anything about them Lance just decides this eccentric, frankly shady group of people (one of them acting overly aggressive btw) is trustworthy to take back to his community. On the way they come across a group of zombies and one of the stormtroopers mentions something called the “magenta swarm” probably hinting at a future No Way Out Part 3 story arc….

The zombies are dispatched and we learn that the Commonwealth has FIFTY THOUSAND PEOPLE IN IT. Good lord, how many people survived the outbreak again? I thought like over half the human population was wiped out or something. And if its a collective of people from around the country, what the fuck compelled them to travel to the middle of bumfuck Ohio? We also learn that they have football and concerts, there's even famous musicians there (IS TRENT COOPS AT THE COMMONWEALTH????) Now it makes sense for people to try to bring back old forms of entertainment, especially when they’re in a big safe community and survival isn’t really a big priority anymore, but concerts? Wouldn’t that… I don’t know attract the dead? 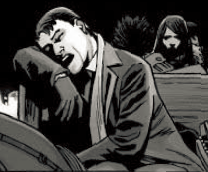 Fuck it, let’s get to the goofy ass ending. The group find a big board filled with pictures of lost loved ones, the franchise has used this idea like 5 times before already. How did all these people just happen to have physical photos on hand of their family members?.And whose picture do we see, conveniently not buried by other photos and front and center? Fucking Michonne, her daughter (who she mentioned twice in the comic and never by name) JUST HAPPENS TO BE IN THIS FUCKING COMMUNITY OH WHAT ARE THE FUCKING ODDS. IF ANY OF YOU FUCKS DEFEND THIS I WILL EAT YOUR CLIT

I've been expecting a video game crossover character for awhile now, but not fucking Elodie. Didn’t the Michonne game imply her daughters died or something? (I haven’t played it) Either way it’s fucking stupid and completely unrealistic, but what else should have I expected from the guy who came up with fucking Beta and went “Yeah, people will take this guy seriously.” Anyway, that wraps up the rant/review whatever. Leave thoughts below! 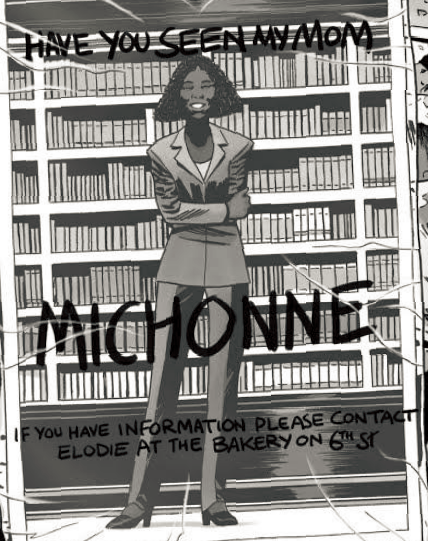 Retrieved from "https://walkingdead.fandom.com/wiki/User_blog:GhostWolf716/Issue_175_Review_(REAL):_%22This_is_so_sad.%22?oldid=1093773"
Community content is available under CC-BY-SA unless otherwise noted.