This Contains No Spoilers or Character Deaths, These pictures are gathered from the last video from The Walking Dead Video, And look how Beautiful Beth is in the Pictures.

Ok so I just took some pictures from the new trailer that came out a few days ago, I only just watched it.

So now after that video we saw all the characters except for Bob, Sasha & Glenn. But we saw a new badass side to Beth, We saw some interesting bits with Daryl & some bits with Tyreese & the kids.

Beth: After seeing Beth in the trailer you can see that new side to her, she is still strong after the fathers death and it looks like we may see alot of development with her. But will Beth stay with Daryl? In all the scenes we see, we see Daryl with Beth once on the traint rack, Will they both get split up? or get sperated? It looks that way since Beth is running away from the walkers by herself, You also gets caught in the paths with a few walkers. I think we will she how tough Beth really is this half of the season And how much of a great survivor she really is. Long Live Beth!

Tyreese: Tyreese will be a mystery to Part B of the Series, how will he cope without his sister and taking care of possibley five kids (Molly, Luke, Lizzie, Mika & Judith) But from what I have seen he has trouble finding where they are, since he looks worried and lost in some of his scenes. He also runs out of the woods like he is chasing somone or something.

Mika and Lizzie: We havnt seen much of these two sisters in the trailer, but from what we have seen Mika & Lizzie are no longer with Luke & Molly, This is just a prediction but I think Lizzie & Mika may get lost in the woods, now having to defend themselves, It was also seen that Mika & Lizzie are walking on the traintracks.

Daryl: The scenes of Daryl have been interesting latley, I think we will see a whole new side to him, It looks like Beth & Daryl have been seperated and Daryl may be getting stalked or about to be attacked by someone, In the picture he is in a dark area, shaking a bit aiming his crossbow at maybe a person? or a walker which he would likley not use his arrow and bash its head in. He also goes inside a house likley to get some supplies. Im excited to see what will come of Daryl and if he eats that snake.

The Train Tracks: From what it looks like these train tracks may be important to the rest of the series. It has been seen that Rick, Carl, Daryl, Beth, Lizzie, Mika and Tyreese all travel on the tracks during one part of the season. Maybe that will be where some of the group find eachother again. Daryl has also walks along the tracks two times during the series, Once with Beth and the other with an unnamed man. 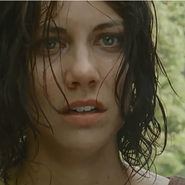 Add a photo to this gallery
Retrieved from "https://walkingdead.fandom.com/wiki/User_blog:Kovarro/More_Thoughts_on_Characters?oldid=471223"
Community content is available under CC-BY-SA unless otherwise noted.