A review of silence for the Fallen44

We are now at the second half of the season, "Spend" was a good episode! Would this episode be better? We are going to find out. Today, I am gonna review Season 5's fifteenth and penultimate episode, "Try" written by Angela Kang and directed by Michael Satrazemis.

So without further adieu let's begin!

Glenn, Tara, Eugene, Noah, Nicholas, and Aiden goes on a mission that would crucially help the community on it's problem with power. Unfortunately, Noah and Aiden dies with Tara suffering a major wound in the head. Meanwhile in Alexandria, Carol told Rick that Pete is abusing Jessie and that there is only "one solution" in dealing with it while Gabriel tells Deanna that Rick's group cannot be trusted and that they don't deserve to live in the community with them.

And so the story of survival continues.

The episode starts with the Monroe family gripping to their loss of Aiden after a tragic accident last episode with his favorite music in the background while amusingly shows Carol cooking in what appears to be for the grieving Monroe family and Sasha shooting at walkers. It's an amusing and brilliant way to start an episode IMO then Reg wants to turn it off (Boo!) The scene where Deanna burns the sympathy note means a clear answer.....MORE TENSIONS. Loving it.

Meanwhile, Daryl and Aaron the recruiters noticed something or someone then the opening starts and I am now reading names....for the 66th time!

A battle of words. Nicholas is being interviewed by Deanna while. Glenn by Rick. Great acting tho. Carol goes on watch looking at the ab00sed people, we can skip that, Reck ignoring Pete and tells him to "keep walking" is just absolutely brilliant! Corey Brill is one of these actors who are casted unexpectedly yet shows brilliance. Kudos to you mang!

6:30 time check. Michonne prepares for her daily routine then comes Rosita telling that Tara is stable and that Sasha is still out in the tower shooting walkers. Rick approaches Deanna then goes on a heated conversation on what to do with Pete and that that they should exile people and not kill them the same way she'd do with Rick in due time. Carl and Enid runs playfully in the woods that led up to me singing "Carl and Enid sitting in the tree K-I-S-S-I-N-G" though they did not really kiss.....almost. Teenage orgasms and Enid haters inbound.

Glenn talks to Nicholas on the lives that is on him because of his cowardly acts....that hidden gun tho. Why are they running together anyway when the episode is only a few minutes away from it's end. A teaser of what might happen? Maybe.

Rosita and Michonne finds Sasha in the woods "playing defense". The entire thing and the flashback walker kills made no sense to me, it's just a collection of random beheadings, and lunging that is inserted into the episode for air time convenience. This is just the only scene throughout where I'd rather make Trevor pick up a hooker and bang it in Grove Street rather than re watch the part. I'd rather put a note and stick it to the fridge that says: Don't help Sasha anymore, let her be in the tower and be rescued by PussyboiSpencer.

Savagery, The "W"s are back this time and now it's at the worst degree, A woman tied up naked in a tree discovered by Aaron and Daryl, It's horrific and traumatic honestly, It's like the collection of dead folks on a tree in the movie, 300. The decapitated body parts and all reminded us how cruel it is out there that a group of men with barbaric actions threatens the very civilization people are building and episode by episode they are now getting closer to Alexandria. Still waiting for Knee-Gun tho.

I'd rather not talk with the whole Jessie and Rick thing in the longest way possible so I'll just exaggerate this expression of mine "Ok"...The main highlight of this episode fir me is the fist fight between Rick and Pete. It's rather intense and amusing in a way, the sequence between Rick and Pete made me a little dizzy yet I still love it because there is just this aura of two men in a tug of war. The fight then stops when a red balloon mediated then Rick goes into his dialogue in a scary way (blood in the face and all) The episode ends when Michonne enters the scene and knocks Rick out in a way that bursted me into laughter (it's the Michonne face) 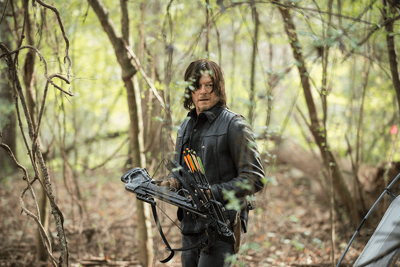 My gratitude to CumtheWood for covering last episode.

The episode isn't that much of a Penultimate material though I have to admit that this is a notch better than the last one "Us". The Conflict between Rick's group and the Alexandrians widens and with the ending in the episode in a cliff hanger of what really happened to Rick after that is truly something to invest our attention on....Would the following be filler? Would the show goes with an even more tragedy in Alexandria just like in the comics? Tensions are amounting to something big and with the constant threat of two entities beyond the walls and within the survivors itself. The finale would I think be epic. The writing is good for me and so as the directing, the acting accolade for this episode should be given to Andrew Lincoln here again. So yeah, While there are scenes that I truly find the whole Michonne - Rosita - Sasha as nonsense (though I have to credit the continuous attention on Rosita), the episode overall is well done.

Liked the new format? Too Trivial? Missed some points? Any violent reactions? Well, Don't be discouraged and hesitant just write it up down in the comment section! BUT please practice a healthy discussion/debate.

Thank you all for tuning and seeking to see more WalkerMaimer reviews and it's companion, The Master Blogs. I am sending my deepest gratitude to each and one of you. This has been WalkerMaimer sayin' have a great and fruitful week ahead and peace out!

If you have any personal problems or anything that you'd like to discuss just send me an e-mail at walker.maimer1219@gmail.com! Also, Don't forget to follow our Wiki on Twitter @walkingdeadw and yours truly @WMaimer.

Retrieved from "https://walkingdead.fandom.com/wiki/User_blog:WalkerMaimer/WalkerMaimer%27s_Review_on_%22Try%22_and_Masterblog?oldid=828804"
Community content is available under CC-BY-SA unless otherwise noted.