Vi C Fuqua was an extra who portrayed a survivor living in Woodbury. He has appeared in other shows and movies as an extra, including Devil's Knot.

A fellow extra reported that Vi C Fuqua filmed for Season 4 as a elderly Woodbury refugee living in the prison, but none of his scenes made it into any episodes. 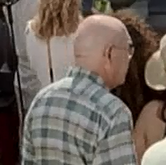 "Say the Word"
Retrieved from "https://walkingdead.fandom.com/wiki/Vi_C_Fuqua?oldid=1309756"
Community content is available under CC-BY-SA unless otherwise noted.