"Walk With Me" is the third episode of the third season of AMC's The Walking Dead. It is the twenty-second episode of the series overall. It premiered on October 28, 2012. It was written by Evan T. Reilly and directed by Guy Ferland.

After witnessing an accident, Andrea and Michonne are introduced to a new community of survivors. As conflicts arise with their new acquaintances, a decision must be made.

A military helicopter is flying when the engine starts to suffer mechanical problems after presumably being shot by the Governor. The helicopter crashes in the forest with three soldiers on board. Andrea and Michonne spot the wreckage's smoke from a distance and go to investigate. Michonne wraps her pet zombie's chains around a tree, and hides Andrea in the foliage so she can go and investigate the wreckage. Two vehicles approach suddenly. Michonne retreats to the bushes with Andrea. From the bushes, Andrea and Michonne watch as a group of men rescue the pilot and stab the two soldiers who died in the crash.

Michonne's pet walkers rattle their chains, drawing the newcomers' attention. She decapitates the walkers to silence them, but, regardless, the two are still discovered by Merle Dixon, who is now sporting a bayonet-prosthetic hand. Andrea, still unwell and in shock of Merle's unexpected return, passes out.

Andrea wakes up blindfolded in the back of a car and overhears the group's leader giving instructions via a CB radio. Before passing out again, she witnesses the car approaching a massive wooden gate.

In an unfamiliar room, a doctor administers an IV to Andrea as Michonne watches. Merle joins them and recounts the story of his escape from Atlanta, saying he nearly bled to death after sawing off his hand. Andrea says his brother, Daryl and the rest of the Survivors went back for him, and that Daryl was still alive when she last saw him months ago. She tells Merle about the deaths of the camp members she is aware of, including Amy. Merle is saddened by this and offers his condolences.

The group's leader — The Governor — arrives and quietly confers with Merle. Michonne demands their weapons back; The Governor assures her they're free to leave the next day, at which point their weapons will be returned. When Andrea asks why he knifed the dead soldiers, The Governor explains that anyone who dies turns into a walker, stating that he "put[s] them out of their misery."

The Governor escorts Andrea and Michonne outside to reveal a peaceful, torch-lit street, saying, "Welcome to Woodbury." He shows them the reason for his confidence in their safety: a sturdy, heavily guarded wall. Andrea marvels as the guards, led by Merle, take out three approaching walkers.

The Governor shows them to their room, where fresh clothes are laid out. Michonne is visibly skeptical, especially when the Governor tells them one of his men will be stationed just outside.

The next day, Rowan, a Woodbury resident, takes Andrea and Michonne on a tour. Children happily roam the street as people go about their business. The guide reveals that 73 people live in the town and that there have been no casualties since the winter, thanks in part to the Governor's strict curfew.

Meanwhile, the Governor visits Welles, the badly injured helicopter pilot. Welles reveals that he left ten men behind so he could scout ahead. "Tell me where they are," the Governor claims, "and I promise if they're still alive, I'll bring them here."

The Governor goes to his adviser Milton's lab, where he discovers Milton and Merle in a disagreement. The Governor chastises them and orders Merle to go learn more about Andrea.

Alone, the Governor and Milton study the still-living heads from Michonne's pet walkers. Milton remarks that Michonne removed their arms and jaws, saying, "Take away their ability to eat, they lose interest in doing so." He explains that the mutilated walkers acted as a repellent.

Later, Milton joins the Governor for breakfast with Andrea and Michonne. Milton explains his theory that walkers retain a trace of the person they once were, asking Michonne about her walker pets: "You did know them, didn't you?" Michonne stays quiet, speaking only to demand the return of their weapons. The Governor urges them to rest a while longer.

After breakfast, Michonne declares her mistrust for the Governor, but Andrea wants to stay in Woodbury longer. Picking up on Milton's query, Andrea asks Michonne about her pets. "Those walkers were with us all winter long, protecting us," she says, "and you took them out without any hesitation."

"It was easier than you think," Michonne replies. She leaves Andrea, visibly upset.

Meanwhile, the Governor tracks down Welles' squad and drives up alone, waving a white flag. He tells the squad leader that he found their pilot and offers to escort them to Woodbury. As the men relax in relief, the Governor draws a gun and opens fire. Woodbury men emerge from the perimeter and gun down the rest of the soldiers. The Governor orders them to collect all of their weapons.

The Governor and his men return to town with the military trucks, along with weaponry, medicine, and other desperately needed supplies. The townspeople gather as the Governor deceives them into thinking that the soldiers had already fallen to biters (their word for walkers) — leaving behind their trucks, medicine, food, and weapons. As the crowd disperses, Andrea asks the Governor for his real name. "I never tell," he says. "Never say never," Andrea replies. The Governor grins, murmuring, "Never."

That evening, the Governor looks over Woodbury from his apartment window as he sips from a glass of whiskey. He walks past Rowan, who is lying naked in his bed, and gazes at a framed photo of his wife and daughter before entering an adjoining, private room. Inside, he settles into a chair and stares numbly ahead, where three rows of aquariums are filled with live walker heads. Among them are the heads of Michonne's pet zombies and the head of the newly-decapitated Welles. 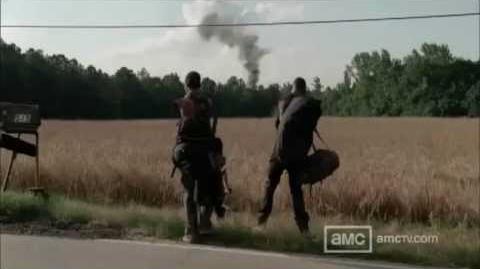