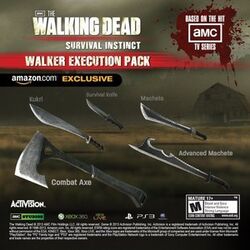 The Walker Execution Pack DLC is a DLC available to anyone who pre-ordered The Walking Dead: Survival Instinct at GameStop or purchased on Xbox Live Marketplace or Steam.

The"Walker Execution Pack" DLC will add five brand new melee weapons to the video game. The DLC was released to the public on April 16th, 2013 for purchase on Xbox Live Marketplace for 240 Microsoft Points and Steam for $0.45

Retrieved from "https://walkingdead.fandom.com/wiki/Walker_Execution_Pack_DLC?oldid=569178"
Community content is available under CC-BY-SA unless otherwise noted.