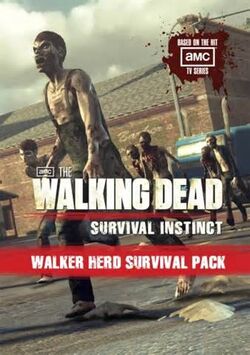 The Walker Herd Survival Pack DLC is a DLC currently available to all on the Xbox 360 Marketplace and Steam for The Walking Dead: Survival Instinct. This DLC includes both the DLC's " Walker Execution Pack" and the " Herd Mode"; adding both a new survival game mode, where the player must fight limitless waves of walkers, and five new melee weapons. The DLC was released to the public on April 16th, 2013 and is available for purchase on the Xbox Live Marketplace for 400 Microsoft Points and on Steam for $4.99/EURO 4.65.

In this DLC, the player is put into a herd survival game mode. The player will begin in Lemon Hill, Georgia with a Survival Knife, two random firearms and a melee weapon. Each round, more walkers will spawn and more locations are unlocked as the player reaches higher waves. Each new location includes more firearms, ammunition, and melee weapons.

This is a list of available weapons that can be unlocked in the Herd game mode.

Retrieved from "https://walkingdead.fandom.com/wiki/Walker_Herd_Survival_Pack_DLC?oldid=1304021"
Community content is available under CC-BY-SA unless otherwise noted.