View source
watch 01:23
Wiki Targeted (Entertainment)
Do you like this video?
Play Sound

Caucasian-American
Wallace Krebs is an American amputee actor who played several roles on AMC's The Walking Dead. His first appearance was the "Car Window Walker" in "Clear" in Season 3. In "Isolation" of Season 4, he portrayed an uncredited prison resident who had his arm amputated as a result of the outbreak in Cell Block D. In Season 8, he was a credited Savior POW in "Still Gotta Mean Something" who had his arm amputated after escaping the Hilltop.

Wallace created a backstory for his prison survivor role:

I was a Cell Block D victim and I pictured that I was bitten in the arm by one of the walkers in the cell block. The others quickly amputated my arm, similar to what they did to Hershel's leg, in an attempt to prevent the spread of the infection. Apparently I went into shock from the injury and Dr. S unsuccessfully attempted CPR, which resulted in me experiencing a 'stabbing' headache. 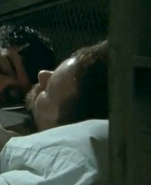 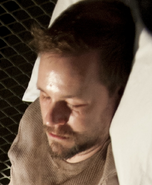