"What We Deserve" is the third and final episode of Telltale Games' The Walking Dead: Michonne. It was released on April 26, 2016 for PC/Mac, PlayStation 4, PlayStation 3, Xbox One, and Xbox 360, and on April 27th for iOS and Android.

In this third and final episode, feeling the weight of choices both recent and long ago, Michonne tries to protect an innocent family... but Norma and the vengeful Monroe crew are closing in. As reality shatters and the ghosts of the daughters she abandoned demand to be heard, your choices will determine who lives, who dies, and what redemption really means in a world gone to hell."

Norma appears outside the house, Michone meeting her, pistol in hand. She talks with Michonne about a trade offer, revealing Pete (Determinant) and the rest of her friends as well. She proposes they trade, Randall for her friends. As a way of showing she is genuine, she frees Pete straight away or fires a flare to reveal the crew to Michonne. (Determinant)

The two parties debate the trade, Michonne having Sam show a bag covered Randall to show/feign he's alive. As they talk, Jonas or Gabby (Determinant) express anger and a desire for retribution for what happened at Monroe. Norma tries to calm them to no avail; they kill Berto, creating a panic in the debate. Norma apologises for their actions, trying to calm the situation. However, Walkers heard the gunshot and begin to approach the group. The exchange can take various forms:

Randall is alive, Michonne makes the trade: Michonne removes the bag off of Randall, enraging Norma upon seeing how heavily beaten he is. Regardless, Norma allows Oak and Saddiq to be freed, the pair hiding behind the gate. Randall is shoved to Norma, the women cutting him free of his bindings as more Walkers appear. Once freed, Randall charges at Michonne and tackles her. In self defence, Michonne or Sam (Determinant) kills him. Norma is deeply angered, ordering her group to attack them.

Randall is a Walker, Michonne makes the trade: Michonne leaves the bag on Randall's head, shoving him towards Norma. Norma allows Oak and Saddiq to be returned. As she removes the bag from Randall's head, she realises he is a walker. She puts him down, quickly ordering her group to attack Michonne and the others.

Randall is a Walker/alive, Michonne does not make the trade: Due to the growing tensions, Michonne calls the trade off. Angered, Norma shoots Oak in the stomach, causing Pete to instinctively shoot Jonas dead. In the commotion, Randall tries to break free from Sam or is thrown forward (Determinant), promptly shot by her. Norma goes to attack but is kicked down by Oak. Saddiq makes it inside as Norma orders her group attack.

Randall is a Walker/alive, Michonne signals Paige: Michonne seizes the moment, signalling Paige to kill Norma. She takes a shot, successfully hitting Norma in the shoulder. Her companions are shocked at the attempted killing, shooting at the group and killing Oak in the process. The scene now plays out as if the player verbally refused to trade.

Norma and her group break down the barricaded door, invading the house with Walkers in hot pursuit. Michonne defends the area from Walkers and humans alike, shooting several down as she retreats to the house. Before she does so, Norma charges towards Michonne, the two engaging in a bloodied fist fight. If Zachery is still alive, he intervenes, trying to stop Norma only to be shot dead by the women. (Determinant) Norma then gains an advantage, drowning Michonne in a pool of water. However, Michonne reaches for her machete, successfully using it to force Norma off and amputates her right arm off. As the women screams in pain, walkers approach and begin to devour her.

Shoot Norma: Michone picks up a pistol and proceeds to mercy kill Norma, sparing her a gruesome death.

Do nothing/Abandon Norma: Michonne watches as Norma is mercilessly bitten to death, screaming in sheer pain. Michonne dismisses her screams, retreating to the house.

Michonne reaches the house, watching as the others barricade the door and prepare to make a stand. The children run downstairs, as does Paige, quickly comforted by Sam. Just as the group decide what to do next, they come under siege from the Monroe group, the survivors bring met with a barrage of molotovs being thrown in through the windows. Michonne shoots at one in an effort to stop them to no avail.

As the house quickly becomes engulfed in flames, the group becomes separated, Michonne being forced to retreat to the kitchen.

Did you let Sam bury her father?

Did you tell Alex what happened to his father?

Did you hand Randall over to Norma?

Did you put Norma out of her misery?

Did you choose to leave your daughters or stay with them?

This list shows the narrative consequences affected by choices from the previous episodes. 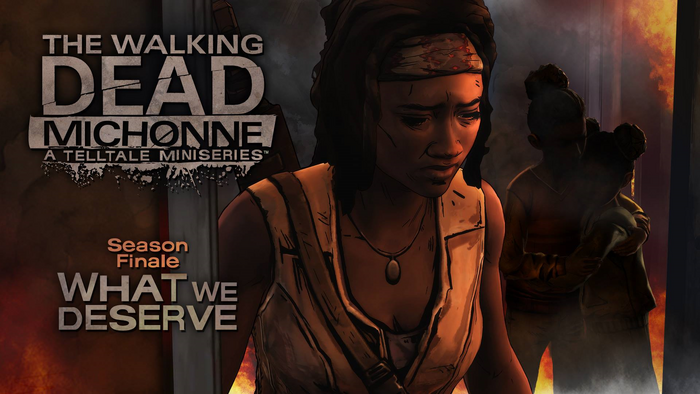 Retrieved from "https://walkingdead.fandom.com/wiki/What_We_Deserve?oldid=1354105"
Community content is available under CC-BY-SA unless otherwise noted.